In 2007 the British Watch & Clock Makers’ Guild celebrated 100 years of existence. The concept of forming a Guild was proposed by Mr. Bahne Bonniksen. Mr. Bonniksen during one of his lectures said “He felt that watch makers had to go through as much training as many professions and it seemed to him that they were going down hill and were becoming toy-makers rather than watchmakers”. He thought this was due to themselves and that they should make their position one of some standing, for that reason he should like to see an association formed along the same lines as the ancient Guilds were to the trade – a Watchmakers’ Guild for the whole of the United Kingdom. (It was not until after the first public meeting of the Guild that we became the Watch and Clock Makers’ Guild.) 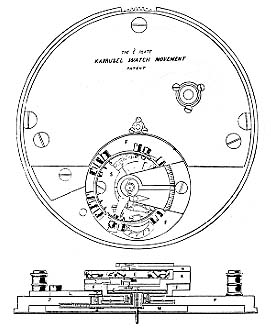 Bahne Bonniksen (1859-1935) was born in Denmark and came to England where he owned his own workshop employing about 25 people in Norfolk Street, Coventry and also worked as a course instructor at Coventry Technical School. Bonniksen is best remembered for his invention of the Karrusel Watch.

In the year of 1906 arrangements were made by a sub committee of the British Horological Institute allowing Mr Bonniksen to use the Institute Hall for a meeting of the proposed British Watch Makers’ Guild. It was considered by the Institute that the work was to be commercial rather than educational and that they would not take part officially. The date was to be the 7th of May 1906 that same year the country was under a Liberal Parliament lead by Sir H. Campbell-Bannerman; San Francisco suffered the Big Quake; the Newport Transporter Bridge was completed and the Dreadnought was launched. The formation of the Guild had occurred to him when he noticed in the press what was being done in Germany and Denmark. If a Guild were formed he thought it should embrace the whole of the trade so that all prices could be fixed and repairs to watches made to pay. It would embrace every firm and individual engaged on legitimate lines in the trade, whether they were watchmakers or not, provided they employed people to do repairs for such goods as they were selling, also to be an affiliation of all the present existing

watchmakers’ societies, so that the British watchmakers’ would ultimately raise the trade so that it would be looked upon as one of the learned professions. For this reason Mr. Bonniksen didn’t want the Guild to be seen as a workman’s association, a retail association, a wholesale association, or a manufactures’ association, all competing with each other; he wanted them to join hands and be a profession. The first meeting was well attended and there was no antagonism from any part of the trade.

Mr Bonniksen explained that the B.H.I. was not connected to the proposed Guild, except that they were always willing to do their utmost to benefit the trade, and they had lent their hall in order that he might have the opportunity of bringing the matter forward and putting before the trade the proposals concerning the new Watchmaker’s Guild.

The first meeting ended with Mr R.W Cole the Chairman of the BHI thanking Mr Bonniksen and saying he “looked forward to having a British Watchmakers’ Guild in existence”.

The first public meeting of the Guild was at the Northampton Institute on 20th September 1906, it was proposed that the association should be called The British Watch and Clock Makers’ Guild and that the object of the Guild would be to promote the welfare of the horological trade generally by:-

It was decided that the membership of the new Guild should date from January 1 1907 and the terms of the subscriptions should be 5 shillings per annum for the employers and 2 shillings and 6 pence (half a crown) per annum for employees, to be paid in advance.
Reports at the time suggest that the idea of the Guild had numerous scoffers who without hesitation said nothing would come of it except talk, but they were proved wrong by the unanimity and enthusiasm of all taking part in the proceeding, (and the Guild’s existence of 100 years).
It was proposed that The Most Honourable The Marquess of Northampton be elected President of the Guild which he accepted and our President is still the current Marquess of Northampton.

It was decided that to make the Guild more efficient they would require some sort of universal trade mark or badge.

To this end the emblem for the Guild was designed by Mr T C Roberts.

It has a shield in the centre above which is seen the rising sun above this stands a Timeball signal surmounted with a five pointed star finial. The shield is divided and quartered in the four sections are a sundial, a clock a transit instrument and an hour-glass.

The emblem has two ribbons with mottos, “FIDELITY EFFICIENCY FRATERNITY” above the shield and “UT TENSIO SIC VIS” (“As the extension, so the force”, which is taken directly from Hooke’s law) below. The shield and ribbons are surrounded by a garter with the title “British Watch and Clockmakers Guild”. 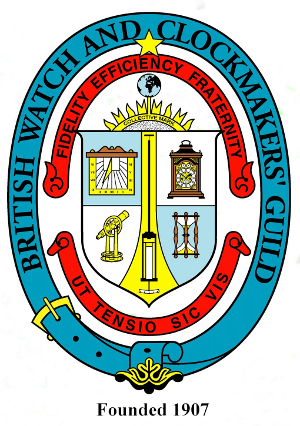 The Marquess of Northampton presided over the first annual general meeting of the Guild which was held at the British Horological Institute on Tuesday 28th January 1908. By February 1909 there were over 500 members. Today, in 2016, the Guild is still thriving, with the same ideals its founders had 100 years before.
We use cookies on our website to give you the most relevant experience by remembering your preferences and repeat visits. By clicking “Accept”, you consent to the use of ALL the cookies.
Cookie settingsACCEPT
Manage consent