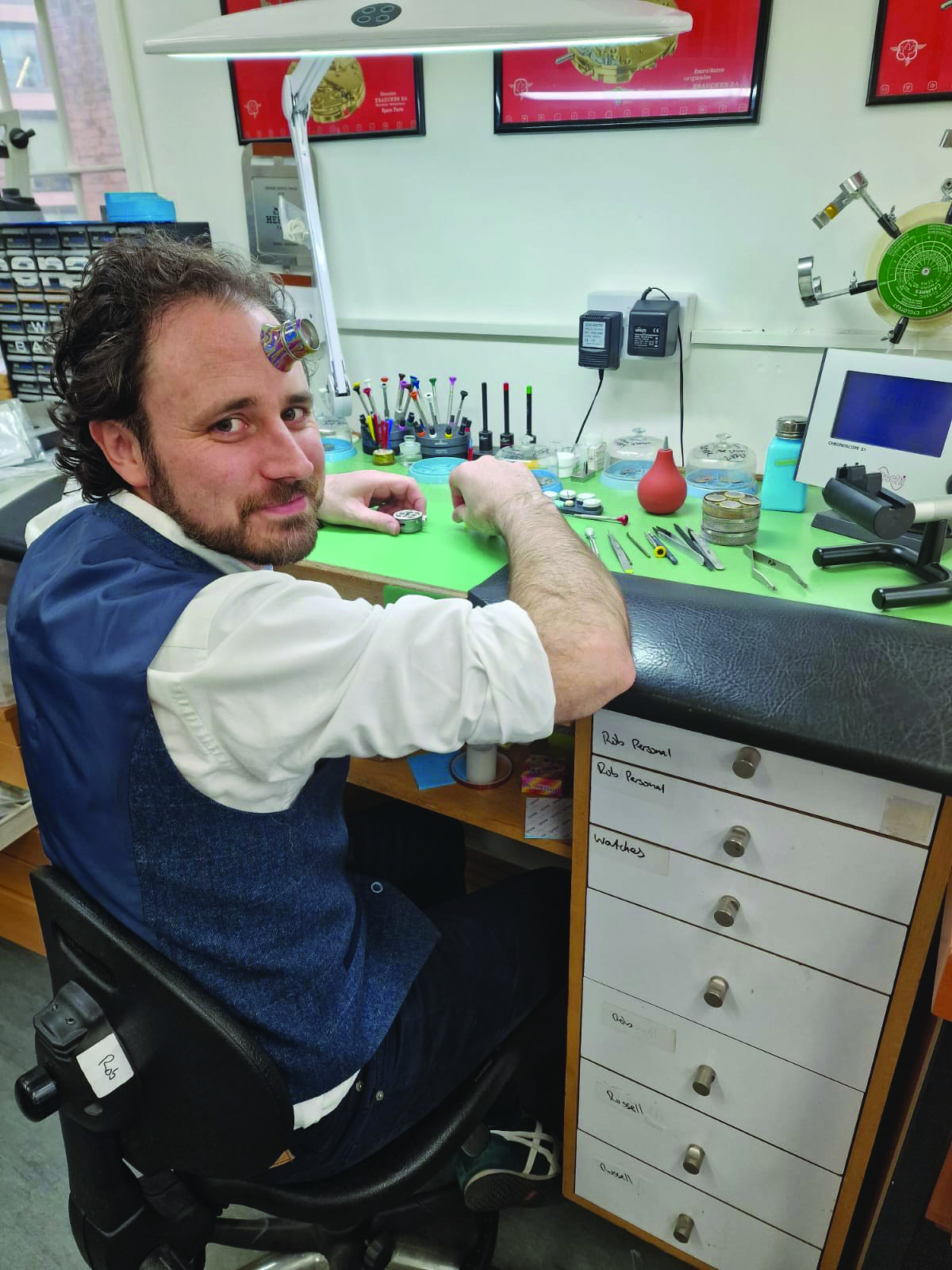 It was the first time that the event has been held since before Covid, hence the two awards (one for 2021 and one for 2022), both of which were given for the best result in the Diploma in Clock and Watch Servicing

Last year’s winner, Robert Talbot (pictured), was on hand to collect his prize of a £500 Cousins tool voucher from TimePiece Editor Jayne Hall.

Unfortunately Alastair Lewis, who won the 2022 Award, was unable to attend the ceremony.

BHI Chairman Robert Loomes FBHI welcomed guests and presided over the ceremony. Once students had received their awards, BHI President Alan Midleton FBHI, gave a short speech and visitors enjoyed a tour of Upton Hall and the Museum.

Guild winner Robert, who was born in Australia, was delighted to receive the prize, which was one of several he picked up on the day.

Although he has a BA in Art History and Cinema from the University of  Sydney, he says he has been interested in horology since the age of eight when he saw a quartz chronograph in a shop.

He said: ‘It was to be my first serious watch and I was fascinated by it – I still have it kicking around somewhere.’

His interest in watchmaking really took hold much later on after a visit to Switzerland. After he and his wife moved to London, Robert began to explore all study options and came across Epping Forest Horology Centre. After a year there, he also started the BHI DLC,  but was only six month’s in when the pandemic struck

He said: ‘I was stuck at home doing classes over Zoom, but with a great teacher at EFHC we made it work. I am still working towards the MBHI and hope to have that after the exams in 2023 and plan to follow on to the FBHI after that.’

After moving to London, Robert spent some time as a full-time parent so his wife  could restart her career in the UK.

He explains: ‘It was when I was looking to get back to work after the kids had started school that I decided to see if I could make a career out of watchmaking.

Robert didn’t have to wait long for that opportunity to arise as he met someone at the BHI who mentioned that Russell Talerman was looking for people. He explained: ‘After getting his phone number on Wednesday, calling him on Thursday, I had an interview and bench test on Friday and a job offer on Saturday to start work on the Monday. I was thrilled. I have now been working for Russell for just over a year now.’

Robert says he wants to continue pushing himself and expanding his working knowledge into all areas of watchmaking, from servicing and polishing through to manufacture.

‘I have the same respect for old school watchmaking where you have to make it work with what you have available as I have with new CNC part making with the fanciest and most accurate mills and tools available.’

Robert said he feels ‘extremely validated and appreciated’ by winning the Guild award.

‘I really feel like the work I put in was worth it and feel the same appreciation towards all the people who helped me on the way to my exams. I also had no idea the prize voucher would be so considerable a gift, it was a very pleasant and generous surprise.’

He is still deciding on what he will spend the tool voucher on.

‘I am still trying to nail down the best way to spend the voucher, whether to use it to get one of the more expensive larger purchases and use some of my own money as well, or to upgrade some of my tools to new versions of what I have and fill little gaps in the tools that I use daily. I firmly believe in getting the best tools that you can afford, so as to be able to keep them for a lifetime so it takes me quite a while to make a final decision.’

Guild Chairman Paul Roberson FBHI said: ‘ I first met Robert at the start of his horological journey on a BHI Course I was tutoring. I could see then that he had a real talent.

‘I am delighted that a few years on he has won the Guild Award. I wish him every success for the future.’