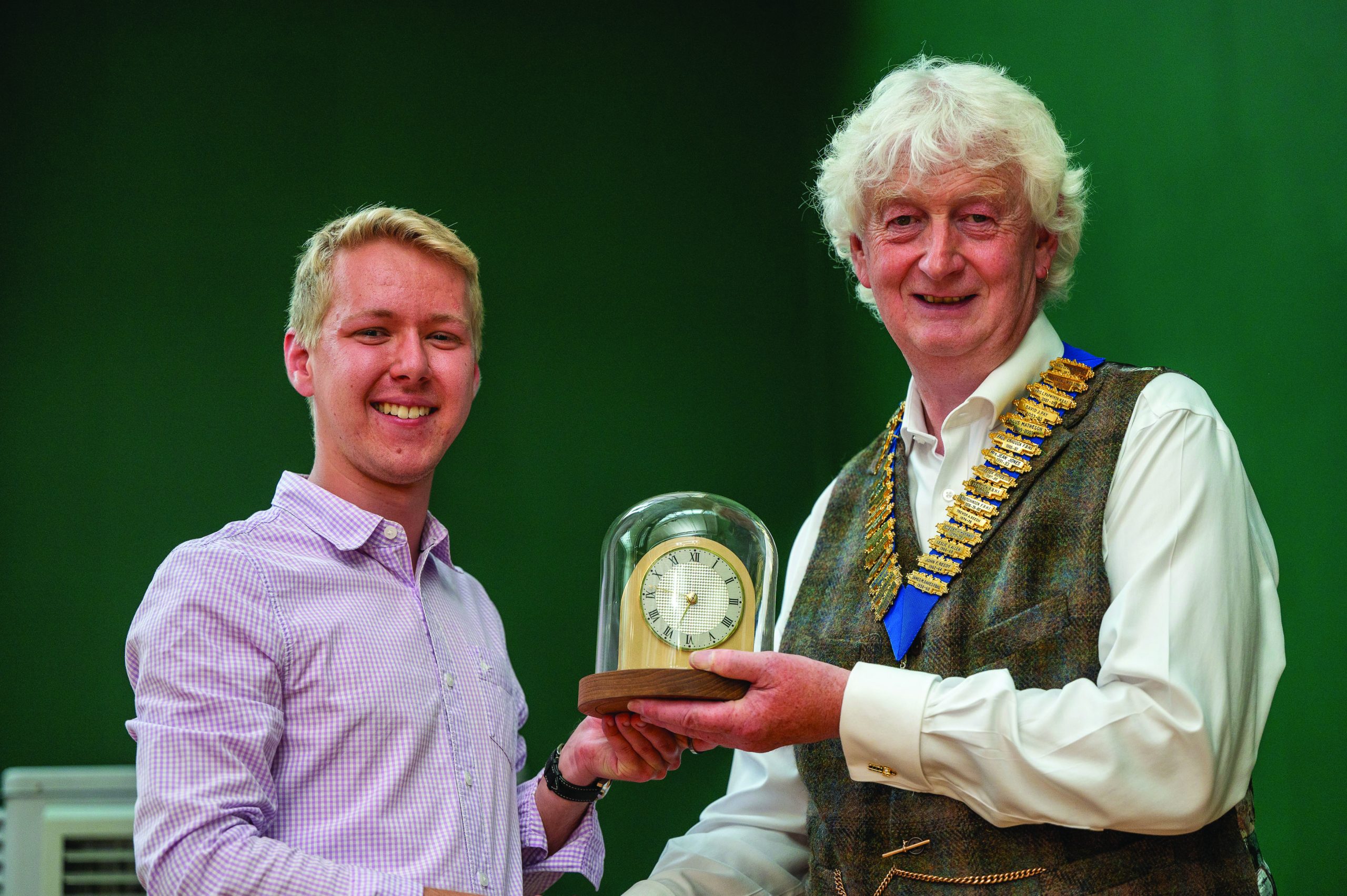 Birmingham City University horology student William Oke has won the BWCMG Annual Award for the highest achievement in Clock and Watch Servicing. He was presented with a £500 Cousins tool voucher by Chairman, Paul Roberson, at the School of Jewellery’s Awards Evening in June.

Third-year student Will has already secured a job working at a watch servicing workshop in Hatton Garden, where he will continue with his training.

He said: ‘I’m very grateful to have my work recognised by the BWCMG. My course mates and I have dedicated our time this year to getting as much out of the course as we could.  It is true that to work on clocks and watches you should not have to rely on having only the cutting-edge in modern tools, however what tools one does have should be reliable. I’m hoping to build up a workshop so that I can continue to learn about watch and clockmaking; studying horology is not an inexpensive undertaking so it is great that students are given the kind of support from the BWCMG.’

Will was born in Ascot and lived in Windsor before studying horology at Birmingham City University. He says he enjoyed playing music at school, so  found it difficult to choose between studying composing or horology at university. He decided at the last minute to apply for the BCU course – and he hasn’t looked back!

He said: ‘I have met quite a few horologists who are keen musicians (and I once played in an orchestra for a pantomime with some players from the BBC symphony orchestra, a previous first violin of which was apparently a keen hobbyist watchmaker in his day); I’m sure more could be written about the connection between the two fields.’

escapement, and a basket-weave dial that I made using the straight-line engine in the School of Jewellery. I’m glad that by choosing this style, I was able to research several makers of humpback carriage clocks, as aside from the book by Allix and Bonnert, there is not much written about them in one place. Moreover, the last humpback carriage clock that I could find was made about 60 years ago by Quill and Godman, but I would be keen to know if there are any more recent examples.’

Of his new role, he said that he chose to do the servicing assessments in both clocks and watches to get the most amount of tuition and because he found both interesting. He added that while commercial watch servicing was certainly not the only thing he wants to focus on in his career, he does see it as a first step into working.

‘Having made this first clock, I’m interested in tackling more in the future, possibly with complications. Because of the nature of how travelling clocks were traditionally used, all the ones of a humpback style feature at least one kind of complication, from the examples with moonphase indications by Jump to the highly complicated humpback clocks with astronomical work by J F Cole.

‘I’d also like to incorporate my interest in music into a clockmaking project. During my degree, I started to read more about the history of science, particularly astronomy. The work of Kepler is interesting for his description of the ‘harmony’ of the planetary motions, by which is meant that the way the individual planets interact in his model, reflect the individual lines of music in early counterpoint. I have not seen a musical astronomical clock representing Kepler’s metaphysical planetary model in this way and would be interested know if there are such examples.’

Chairman, Paul Roberson, at the School of Jewellery’s Awards Evening in June.

Paul said: ‘I would like to congratulate William and all the other students on the hard work they have put in during their horological courses – it’s great to see so many people with so much talent coming into the trade.’

Will believes his interest in horology came from his Grandad who had a particular passion for mechanical watches and reading about how they worked. When his great-grandfather’s watch (he was in a guards regiment at Dunkirk) was passed down to him – he was hooked and continues to be fascinated that so much history can be linked to just one object.

He adds: ‘The first clock I disassembled was an American striking movement with open mainsprings. It was quite the battle having only just received the clock repairing book by De Carle. Thankfully, aside from a new appreciation for the strength of mainsprings, the clock was serviced quite well without any damage to it, myself or the conservatory I was doing it in!’

Will says one of the benefits of living in Windsor is having the Castle so close by with so many incredible clocks in the Royal Collection. He has worked at the Castle, and viewed the collection first-hand. Seeing the work of the conservators and meeting Steven Davidson in particular, really cemented his interest in pursuing horology as a career.

He says that the best thing about studying at BCU was being able to spend so much time in the workshop with his course mates.

‘It’s difficult to find anything that compares to the camaraderie that comes from spending three years in one space, challenging ourselves and learning together. The final project of the course is to create a horological mechanism, which gave us all an opportunity to experiment with a broad range of manufacturing and finishing techniques such as enamelling, black polishing and engine turning, with everyone encouraging and bouncing ideas off each other.

‘For my final project, I made a clock in the style of the humpback carriage clocks by Breguet and Jump, with an eight-day movement that uses screwed wheel collets, platform

Other BCU Horology Awards for 2022