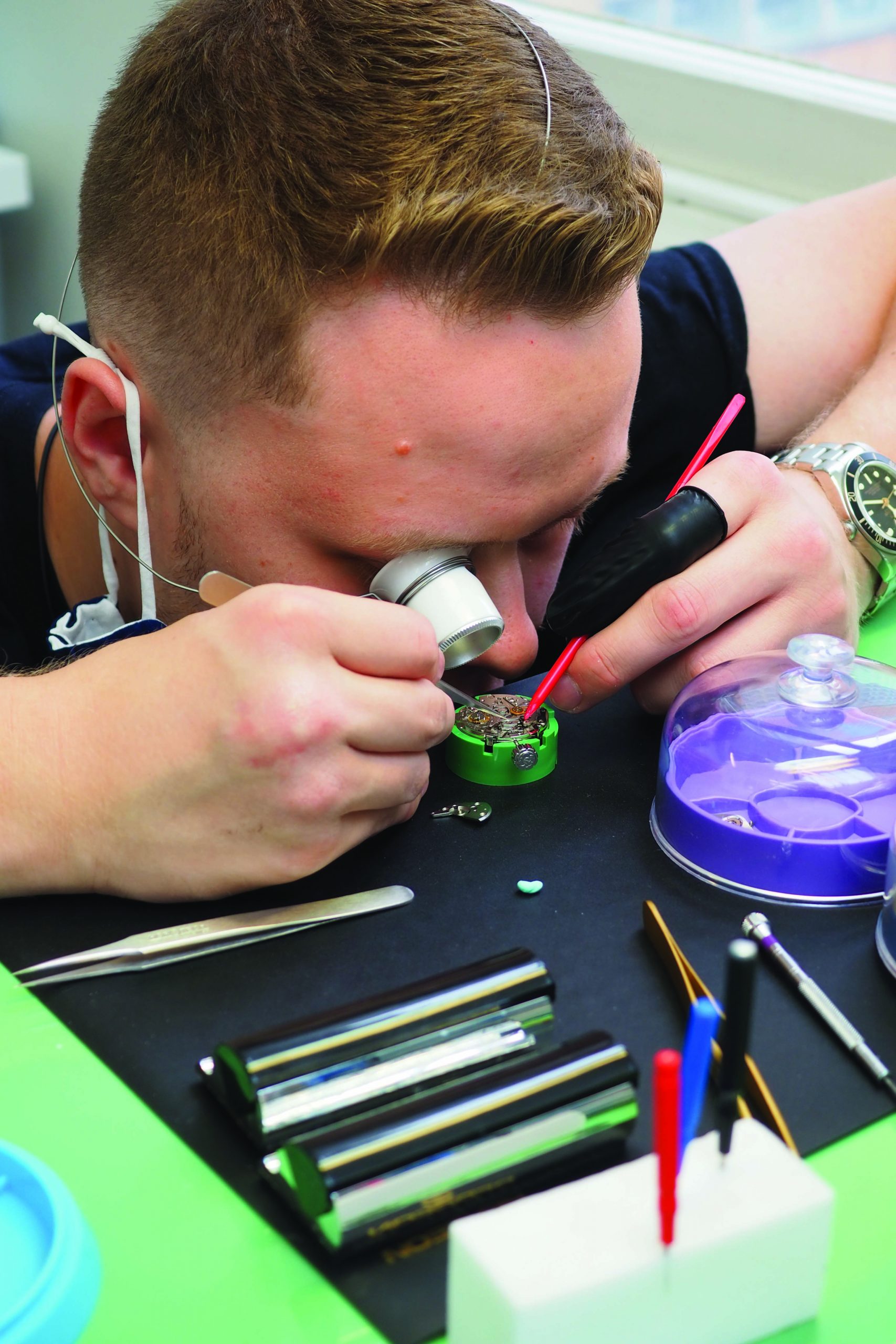 Due to coronavirus restrictions the award was presented virtually by Head of Horology, Jeremy Hobbins, on behalf of Guild Chairman Paul Roberson, who joined the ceremony, along with others, via Zoom.

Lewis is delighted with Award, which consists of a £500 Tool Voucher from Cousins. He said: ‘I would like to thank the BWCMG for this award as it will help me to set up my home workshop and give me the ability to finance new tools and equipment.’

‘It is an award I am immensely proud of and I am truly grateful to the BWCMG, BHI, GDET and staff at the School of Jewellery for their continued support of me and my peers.’

Growing up in the Birmingham area, Lewis says that he first took an apprenticeship in business, studying on a day-release basis. However, when he had finished the course he saw a job as a watch technician with a national company, based nearby.  He applied but, as he had no technical experience with watches, did not think he would get very far. However, he managed to secure the role and it was the start of his career in horology.

He said: ‘After enjoying the role for some time, I knew that I wanted to become a watchmaker and I knew I had to take the next step to become one.’

‘I began to research the best route for training and as soon as I heard about the Horology course at Birmingham’s School of Jewellery, I knew it was the one I wanted to attend.’

‘The company I was with were fantastic and offered me a part time role in a watch boutique while I studied. I have worked there throughout my entire time on the course which has really helped me fund my studies.’

Lewis says that he has always been obsessed with how things work and interact and was always taking things apart. He says: ‘My older brother still reminds me that I was never good at putting his things back together again!’

‘I have always liked watches and have worn them most of my life. My dad has always worn mechanical watches and my parents have always encouraged us to choose a career that we will enjoy.’

‘Whilst I worked in my apprenticeship, I saved for the year to buy my first ‘proper’ watch which was an Omega. I’m sure it was this that was the catalyst for a career in horology. I loved my watch, but I always wondered what makes other watches different and unique. I joined the British Horological Institute to learn more and attend some of their courses.’ It was during a Clocks Taster Day that Lewis met Guild Chairman Paul Roberson, who was the course tutor.

With his University course now completed, Lewis has taken up an Apprentice Watchmaker position with his original employer and says he is excited to gain new, on the job, knowledge and experience.

He adds: ‘I am hopeful that over the next few years I will be able to develop my skills to eventually take on a more specialised role. Aside from the practical aspects of watchmaking, the historical side has always fascinated me and eventually, when my technical knowledge is established, I aim to study for my Valuation qualifications as I am very interested in this area.’

When he’s not watchmaking, Lewis is a keen air rifle shooter, enjoys visiting museums and photography.

Guild Chairman, Paul Roberson, said: ‘I would like to congratulate Lewis for all the hard work he has put in during his time at BCU and wish him well in his future career.’

‘I hope he finds something useful to spend the voucher on. I received a similar award when I was young and spent mine on a staking set, which I still use today.’