anOrdain, a vibrant ‘new’ Glasgow-based watchmaking business, which specialises in making enamel dials in time-honoured tradition, has just received a £60,000 grant to help them expand even further.

Founder Lewis Heath opened the Scottish studio five years ago with the plan to make enamel watch dials – little did he know that it would take three years and endless hours of trial and error  to learn how to perfect the art.

He explained: ‘In the early days it was myself and one full-time jeweller. We didn’t know how to make an enamel dial and there wasn’t any literature on it or courses available, so it was three years of trial and error before we got it right. We certainly didn’t plan for such a lengthy period prior to launch, but there was a lot to learn!’

From the very beginning, the Company’s main aim was to look at mastering old techniques which were dying out or had disappeared and use them to explore new ideas in design. Their  motto is ‘Old Crafts in New Hands’ and today’s team are mostly under 30 and art school graduates, making design very central to what they do.

anOrdain officially launched two years ago and have grown steadily ever since with their first run of 250 Model 1 mechanical watches selling out in record time. Two further ranges have now been introduced. There is now a 10-strong team, with three being full-time dial enamellers and two being watchmakers – one fully qualified and one a new apprentice. 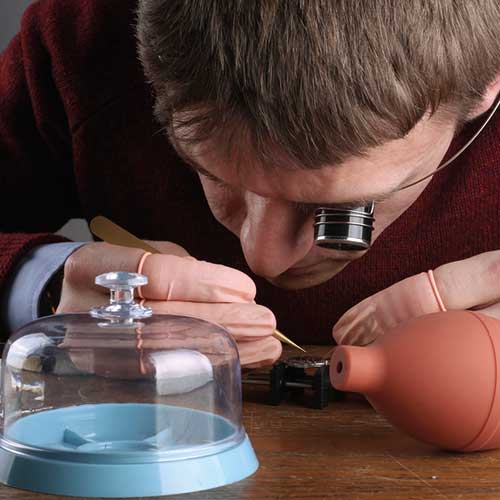 Lewis explains the concept behind the Company: ‘The idea of making watches in Scotland first came to me many years ago when I was fishing by a Scottish Loch at Assynt, in the Scottish Highlands, called anOrdain. I thought to myself ‘‘what could I do to make a living here?’’ At that time I knew nothing about about watches but decided they lent themselves to the Highlands. Funnily enough it’s actually why the Jura Valley became a hub for horology!’

Following the 2018/9 launch, Lewis is pleased to report that they have had a waiting list since day one – mainly, he says because ‘we are very slow at making watches and we are regularly told they are underpriced. But the response has been fantastic and people around the world have really been interested in what we’re up to.’

Of the staff, Morna, Sally and Nicky are the enamellers; Chris and Euan are the watchmakers; Euan (II) is design engineer who makes cases using 3D computer modelling; Imogen is the typographer, Evan does photography and is web design, Erlend organises everything and Lewis says he simply gets in the way.

Lewis’ search for a clockmaker was long and intense. ‘I tried for years to find a watchmaker to work with us, but there didn’t seem to be any young people in the profession up here. I eventually found Chris Roussias, a week before our launch, through our local BHI Branch. He had been working at Amazon as a picker – and hating it, whilst studying with the BHI in his spare time. He’s incredibly self depreciating when it comes to his abilities, but he is a first rate watchmaker and has won awards for his servicing.’

Euan Fairholm, the new apprentice, who started in January, has a degree in Engineering from Glasgow and had been repairing clocks as a hobby.  And his love of watches obviously keeps him going on his four hour daily commute from Edinburgh to Glasgow and back.

He said: ‘Horology has been a hobby of mine for some years now, having repaired clocks in my spare time. To move onto watches is sort of a natural progression in that the components are similar but on a much smaller scale. Getting paid to do it is a dream come true.’

‘I love that no two days are the same. Our bread and butter is watch assembly, but each watch is slightly different in the way it goes together, either due to the nature of the enamel dials, or because the movements need some extra attention. We also get watches coming in for the occasional service, so I’m doing it all, under the guidance of the company’s watchmaker, Chris,’ he added.

anOrdain’s sole business now is to make and sell their own brand of watches. In the past they have supplied others, but say it’s a distraction from producing their own range, especially when they have a waiting list. The enamel dials are made on site using time-honoured techniques and they use Sellita and ETA movements in their watches, although they are now working on their own movement.

Lewis adds: ‘It’s very early in the process, but to be really independent it is something we see as a necessary step. We’ve had huge problems with supply in this area, so it’s forced us into exploring this route before we would otherwise have done but that’s not necessarily a bad thing.’

Future business plans include to continue to explore enamelling. ‘We are at a point where we are doing things in the studio which aren’t done elsewhere today, and that’s where our focus is ­continuing, allowing us to gain expertise and flourish.’

The loan, through UMi Debt Finance Scotland, is part of a £12 million fund that forms part of the Scottish Government’s Scottish Growth Scheme. It has enabled anOrdain to take on more staff and increase it’s range of watches from one to three.

‘Lewis is not only building his own business, but is also preserving the intricate art of watchmaking by taking on an apprentice and creating roles for other craftspeople.’